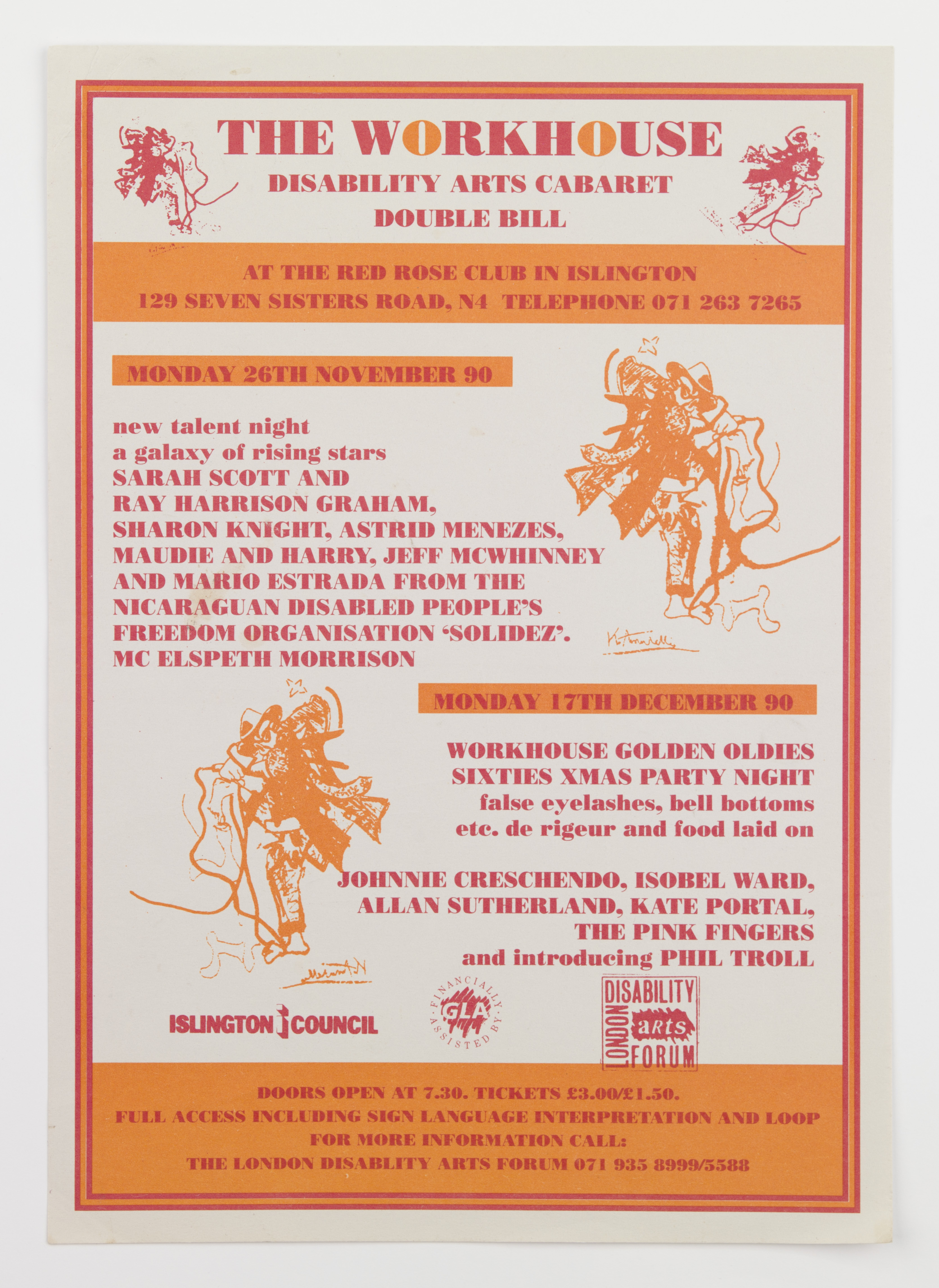 This audio description has been compiled by Colin Hambrook in February 2018. It was commissioned by Disability Arts Online on behalf of NDACA (the National Disability Arts Collection and Archive). It is approximately 10 minutes 20 seconds long.

This is a flyer promoting a cabaret produced by the London Disability Arts Forum, designed in a Gravitas One font – a typical poster font with both bold and very narrow verticals. The text is in red lettering on an orange and white background. A loose line drawing of Allan Sutherland performing features in two sets, reversed, in red on the header and in orange on the main poster image. The drawing looks a little like a Boz illustration from a 19th century novel. An assembly of long coat and scarf – material flying as though he’s struggling to put it on. Strands of fabric are caught under his bare feet. He wears a brimmed hat and glasses. The sketch is by Katherine Araniello whose signature appears beneath. A border made of two red lines with an orange fill surrounds the edge of the flyer.

The headline reads: ‘The Workhouse: Disability Arts Cabaret Double Bill’ in block capitals across three lines in red lettering on white. An exception are the ‘O’s in Workhouse, which appear in orange. The full address and phone number of the Red Rose Club, Islington is in red lettering on a band of orange below.

The Workhouse disability cabaret became LDAF’s flagship event. It was developed according to an idea about collective identity proposed by disabled academic Vic Finkelstein:

“if we (disabled people) are to make our unique cultural contribution to society then this must come collectively from the people, it cannot be imposed on us by leading disabled individuals from the top down, any more than it could, or can be, imposed on us by occupational therapists, art therapists or any other therapists that are forced on us in the future… Disability culture… must develop spontaneously and creatively out of the collective experience of disabled people.”

The Workhouse cabaret – named after the Victorian Workhouse – the forerunner for residential homes, institutions and hospitals where disabled people lived – provided a space where disabled audiences could come to enjoy the work of disabled performers.

Like the disability movement of the time, the workhouse brought together people with a wide range of impairments, rejecting the impairment-specific model of organisation offered by the disability charities.

Disabled writer Allan Sutherland who regularly performed a stand-up routine at The Workhouse explained the thinking behind the event in Choices, Rights and Cabaret, saying:

“It was immensely liberating for disabled artists to be able to perform to disabled audiences. It enabled them to develop material that was unapologetically disability-based, knowing that it would have a resonance for the audience that would be largely or entirely absent from a performance in a mainstream venue… for a disabled performer the dynamic of a performance is entirely different when working to a mainstream audience. One has to grapple with prejudice and sometimes outright hostility and create acceptance of one’s disability before an audience starts to pay attention to one’s act. This difficulty is intensified if one wants to perform material that is actually about disability, of which most of the audience will have no experience…”

Subjects for performance within the variety acts who featured within The Workhouse spoke often of disability issues and patronisation, discrimination, access, and stereotypes with frequent criticism of charities and the medical model of disability, which defines disabled people by the nature of their condition, rather than as human beings in their own right.

As the Workhouse developed so did the politics. The early act of Johnny Crescendo (Alan Holdsworth) included classic blues songs chosen for their disability relevance such as Ted Hawkins’ tender “Sorry You’re Sick’ and Big Bill Broonzy’s impassioned song about civil rights, ‘I Wonder When’. Johnny Crescendo began writing material aimed directly at the disability audience.

A regular performer in her own right, Sarah Scott recalls the power of another Johnny Crescendo song, ‘Choices and Rights’ at a very early LDAF cabaret: “The words were unusually clear for me to follow. His singing and his strumming meant business. Simple and straight up, the music and the Disability Arts movement was rolling… and I realised it had taken me with it!”

Sarah Scott and Ray Harrison Graham were Deaf performers who pioneered Signed Song – a dramatisation of popular songs using British Sign Language – at the Workhouse cabaret. Scott recalls: “when in 1986 we performed one song by Yazoo ‘Don’t walk away from love’ at a Deaf performance event – unbeknownst to us a TV producer was in the audience and booked us on the spot for a series of TV programmes on Channel 4 ‘Hand in Hand’ for deaf and hearing children.”

However, following the lines of the alternative cabaret circuit, which was in its heyday in the 1980s, anything was fair game for entertainment in the Workhouse, which aimed to permit performers to gain experience. Recalling the drawing of him repeated on the Workhouse cabaret flyer Sutherland says:

“Katherine Araniello drew me performing at a cabaret in Greenwich. The MC didn’t turn up and I was asked to compere with no material to hand. The reason I’ve got bare feet in the drawing is that one of things I did – hastily improvising on the fly – was to take my socks off whilst pulling a rabbit impression with my teeth.”

Some performers on the bill of the December 1990 Workhouse went on to further innovation. Jeff McWhinney, for example, went on to introduce the videophone to the deaf community in the early 2000s. A One World Action publication from 2001 ‘Learning from experience’ outlines the impact of Solidez in its aim to strengthen organisations of disabled women in Nicaragua.

The Workhouse took place at a number of different venues, but there were always two basic ground rules: the event must be fully accessible for disabled people – and it must have a bar. The Red Rose Club became a popular host when Albany Video produced ‘The Disabling Council’ – a training video on Disability Equality or the Local Government Training Board – and produced a cabaret specifically for the video. The video consists of interviews with disabled people, all of whom worked in local government apart from academic Mike Oliver, interspersed with songs and comedy material by disabled performers. Its central concept is disability as a social construction.