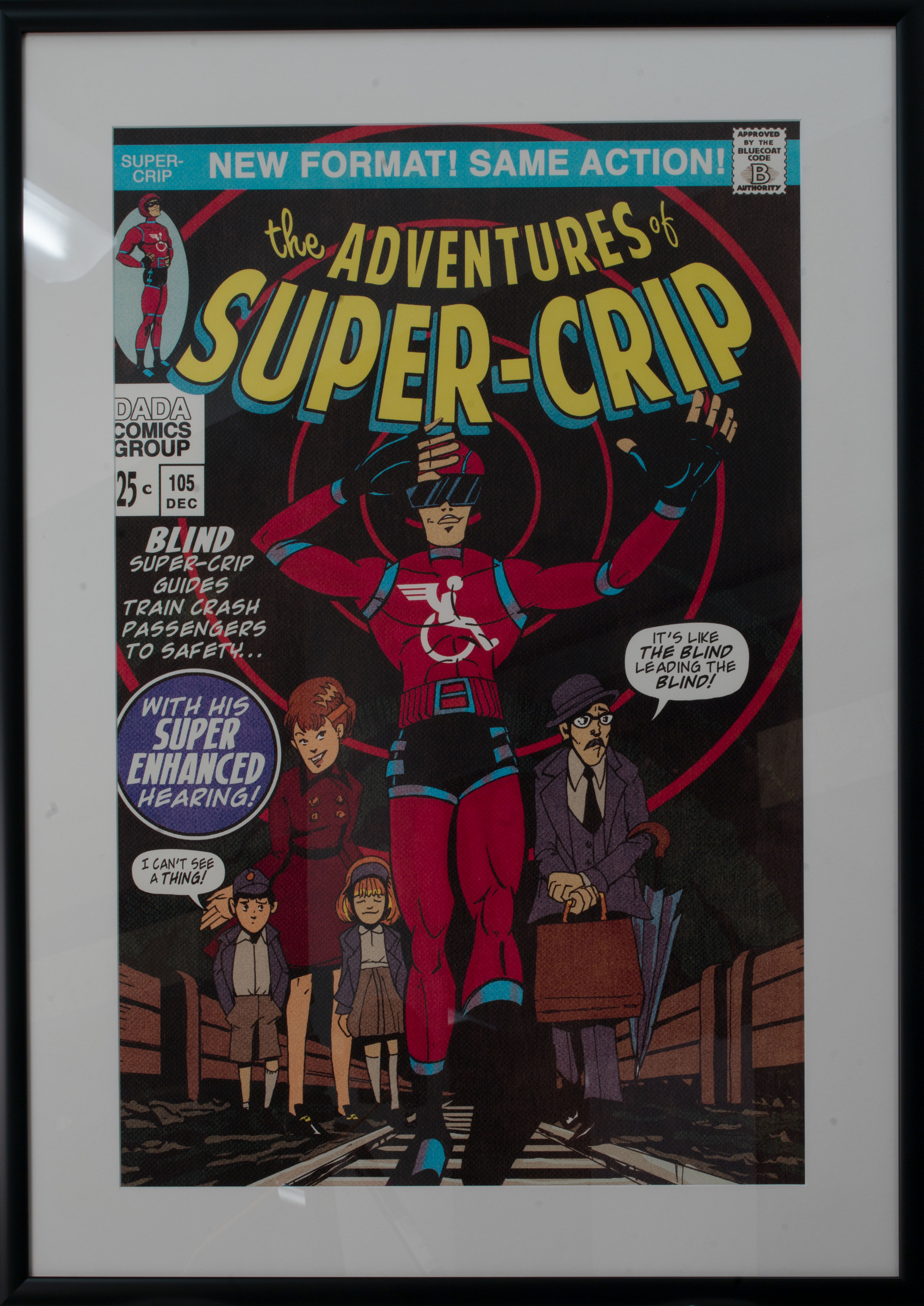 The Adventures of Super-crip by Andrew Tunney and Lawrence Clark

This audio description has been compiled by Trish Wheatley in February 2018. It was commissioned by Disability Arts Online on behalf of NDACA (the National Disability Arts Collection and Archive). It is approximately 5 minutes 50 seconds long.

The Adventures of Super-crip Underground is one of a series of A1 posters by Andrew Tunney (aka 2hands), devised in collaboration with disabled comedian Lawrence Clark. Issue 105 December shows Super-crip in a classic red skin tight ‘pants on the outside’ superherooutfit, complete with red helmet and large black visor. With his hands out in front of him he strides along an underground railway line, which stretches back into the darkness behind him. Red circles radiate out from his head. On the left hand side behind Super-crip is a woman with a small girl and boy in school uniform. The boy has a speech bubble, which says “I can’t see a thing”. On the right, a man wearing a business suit, glasses and bowler hat carries a briefcase and brolly. He walks alongside them with a speech bubble that reads: “It’s like the blind leading the blind!”

The issue summary provided in full caps handwritten text typical of comic books reads “BLIND: Super crip guides train crash passengers to safety… with his super enhanced hearing!” The comic title ‘The Adventures of Super Crip’ is written in large yellow font with a blue drop shadow, with the words ‘the’ and ‘of’ in small handwritten style. A blue bar runs across the top of the poster with the text: ‘Super-Crip New Format! Same Action!’ A small white box in the upper left of the poster displays black text reading ‘Dada Comics group 25cents’ Above this box there is a small avatar of Super-crip standing in profile set against a blue oval.

The posters were commissioned by DaDaFest for the Niet Normaal exhibition at the Bluecoat, Liverpool in 2012. Tunney brought Clark’s disabled super-hero character to life in a collection of posters designed in the style of comic book covers. SUPER-CRIP’s super power is that he can switch impairments to overcome adversity and danger to himself and others.  By entertaining one impairment he gains super-increases in all other senses by way of compensation. By turning himself blind he gains the increased ability of SUPER HEARING to navigate in the dark, thus confronting more common stereotypes about blind people in popular media and fiction.”

Lawrence Clark is an internationally-acclaimed comedian, writer and actor who has cerebral palsy. He has a long history with DaDaFest, launching his career at their inaugural 2001 event. His shows are observational, pointing out the absurdity of life and human behaviours, often featuring situations he encounters as a disabled person who uses a wheelchair. He makes use of powerpoint and projected video in his shows to great comic effect.

Andrew Tunney is an artist and writer from Manchester, UK. He picked up the alias 2hands because he can draw with both hands at the same time, though he claims this is not because he is ambidextrous, but because he works hard. He describes his work as often being “youth focussed, street driven, with an eye for fashion and is inspired by film, comics and animation.”

Tunney explains on his tumblr site that “The term ‘super-crip’, in basic terms, is used to refer to a common stereotype found in the media’s portrayal of disabled people; smiling, happy, can-do types who are often outrageously praised for always striving to “overcome” their situations. Laurence examines the stereotype by way of lampooning the traditional image of famous comic book super-heroes… many of whom have an impairment themselves (Professor Xavier, Daredevil, Thor/Donald Blake). Tunney’s artwork blatantly references many 60s Marvel characters in the work itself.

“the point is that impairment is ordinary, not special. Dealing with the difficulties that having an impairment brings is enough without having to negotiate a world which shuts you out by judging against definitions of what is ‘normal’. Super-Crip lampoons the image of the disabled hero confronting the ridiculousness of being so special with his power to switch impairment at will, playing on the stereotype that the loss of one sense, means the heightening of other senses.”