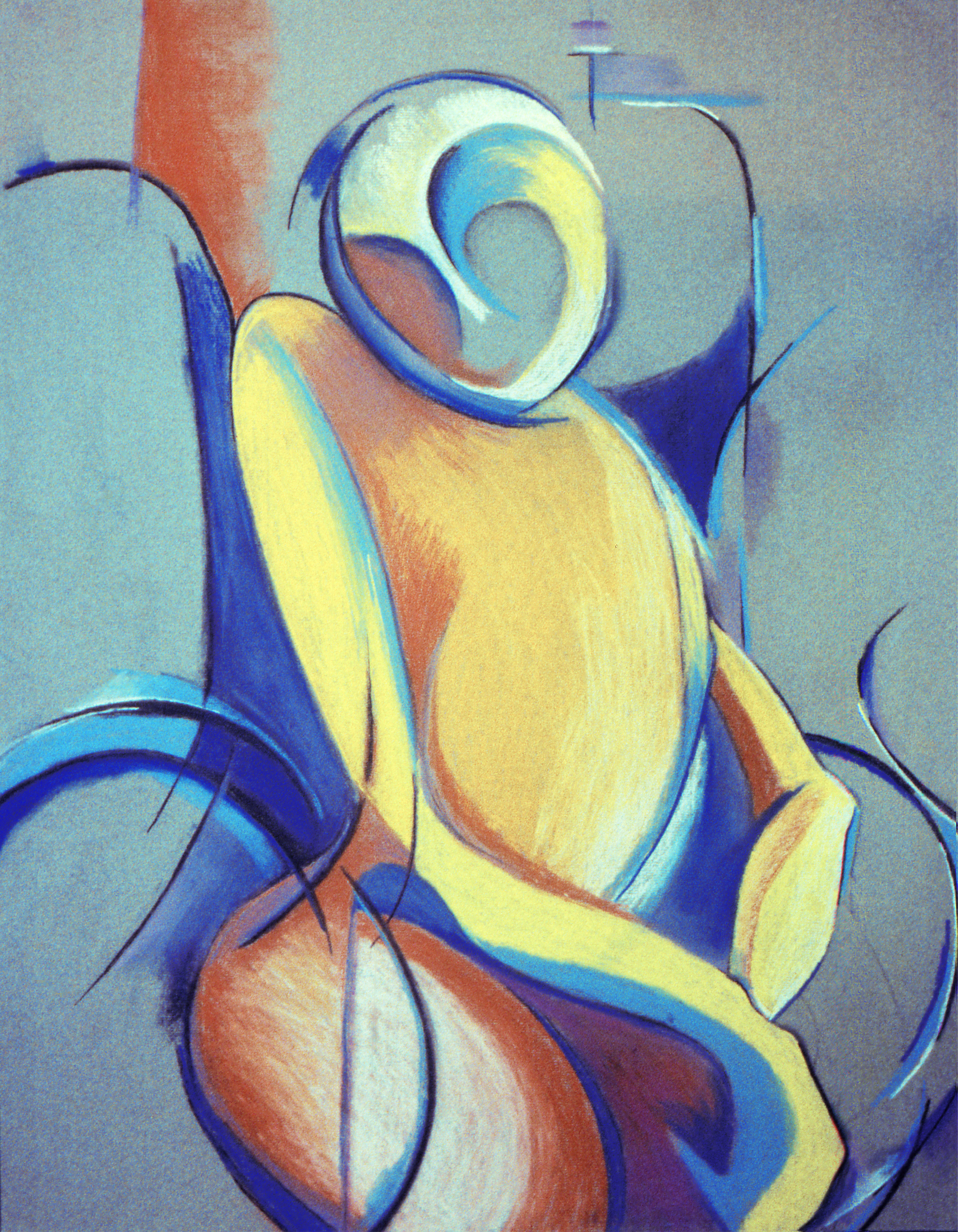 Self Portrait 1, pastel on Ingres paper by Nancy Willis

This audio description has been compiled by Colin Hambrook in February 2018. It was commissioned by Disability Arts Online on behalf of NDACA (the National Disability Arts Collection and Archive). It is approximately 10 minutes 50 seconds long.

This is one of a series of four Self Portraits made in pastel by Nancy Willis in 1983. In this half-length portrait, a woman sits in a wheelchair. The figure and chair, in three quarter view, face to the right. Turning back towards us, the stylised head is angled down and nestles into her shoulder. The face is drawn in a sculptural fashion with curves of smeared pastel suggesting the depth of eye sockets and the bridge of a nose.

The softer, speckled pale blue tones of the background paper appear through one side of the face, giving the figure an ethereal quality. One shoulder is lifted as she leans on the armrest, while her other shoulder is hidden from view. The arms and wheels of the chair, which spread beyond the picture plane, are suggested with a few black lines filled out in ultramarine blue with hints of cobalt. The figure is predominantly yellow. However, a streak of red appears in the top-left corner of the image, balancing the reds in the torso and hips and adding to the three dimensionality of the image. Although the figure has a strong presence, it is as if she floats in a state of reverie.

Nancy Willis is a London-based artist who works in a wide range of media, including painting and printmaking. “As a child I was able to run about and play with my four brothers, dreaming of becoming an explorer, or joining the circus as a trapeze artist. But as I grew up I gradually became disabled by Muscular Dystrophy and ended up at a residential ‘special’ school. By the time I left I was no longer able to walk or run about, but I was longing for freedom and adventure.”

Art College was a natural choice for Nancy. She studied at North East London Polytechnic [1972-5], first exhibiting in 1982: A Festival of Artists with Disabilities. It was around this time that Nancy became aware of the work of Frida Kahlo and was deeply moved by the artist’s representations of herself as a disabled woman. Drawn to Kahlo’s fierce honesty in expressing both the passion and the pain of her experience, Nancy resolved to make work that spoke authentically of her own life: “I wanted to show how it feels to be a young woman in a wheelchair.”

Self Portrait 1 (pastel on Ingres paper), was first shown in 1984 as part of a group show:

‘Artists with Disabilities: Coming into View, Coming into Reach’. In the exhibition catalogue the artist describes her process of making the drawing as being a search for an inner self: “I have done self-portraits before by looking in the mirror… as if I was somebody else. Now it is from my feelings that I am trying to draw myself… these are the most personal things I have ever tried to do.”

Self Portrait I is a pastel on Ingres paper, which is textured with an almost invisible grain. The artwork represents the artist’s first experiments in drawing from her subjective experience of the world, to evoke an expressionistic, emotional interpretation of it. The tones of the ultramarine blue of the chair and yellows of the torso and arms are equally balanced. The warmer yellow and red tones, which would naturally come to the fore, are held in check by the sweeping and angular blue marks representing the wheelchair. The drawing conveys a balance between the freedom to explore the world afforded by the artist’s wheelchair and the constraints of society’s objectification of disability.

From 1990 – 1992 Nancy became Artist in Residence at Hammersmith Hospital, making work for permanent display as part of the Hospital’s art collection. She made many drawings of babies in the neonatal unit. These studies were the beginning of ‘Early Days, Holding Promise’, a mixed media work that captures the fragility of human life. Further sculptural works include ‘Taking Leave’ and ’Seeking Comfort’, in which the strength of the bronze she cast contrasts with the tremendous fragility and nurturing quality in the figures represented. These works find expression not only for the artist’s struggle with illness and increasing disability, but also reflect her inner fears and sense of vulnerability.

Years of working with complex media made Nancy long for something simpler. In the decade that followed her residency she went back to painting, but abandoned brushes. Working instinctively, without planning, she stroked and dabbed the paint with her fingers until new imagery emerged: pictures not for the mind but for the heart. Her paintings spoke from a unique perspective and understanding of life and death, some expressed her vitality and joyous energy while others were driven by the sadness and deep sense of loss she felt after the death of two of her four beloved brothers.

In 2003 Nancy became Artist in Residence at the Byam Shaw School of Art. With access to printmaking facilities and with expert guidance, she developed a process that combined drawing with printmaking. She arrived at a series of landscape monoprints using the muted tones of dawn, cloudy days and twilight. “In these landscapes of fields, hills and trees, animals go about their business, grazing, roaming or standing together in quiet communion…  These animals are the heroes in the stories told through my marks, textures and colours.”

In 2007 Nancy made an award-winning documentary ‘Elegy for the Elswick Envoy’, shown on Channel 4 as part of their ‘New Shoots’ season of short films made by disabled directors. The film is a loving portrait of the artist’s unique, wheelchair-friendly car. In this personal road movie, Nancy can see her own struggle for continuing mobility mirrored in the increasingly unreliable performance of her battered old car. As it reaches the end of its working life, Nancy sets out to find a final resting place for her beloved Elswick Envoy, to ensure that it will not vanish without trace from motoring history.

Between 2008 – 2010, Nancy made ‘Transformation’: A digital moving image project, inspired by ‘The Explorer’ – a series of poems by Allan Sutherland commissioned by Disability Arts Online. The themes in Transformation partly emerge from external difficulties and partly from those inner conflicts, which are rarely explored territory in the struggle for equality and human rights. The animations explore complex ideas about the nature of memory, identity and disability, catching fragments of the past, which might be lost forever if not documented in some way.

In 2012, recovering from a serious illness and a long period of hospitalisation, Nancy needed to reconnect with the world: to draw from life and be out in the air looking at nature. “With my increased disability, it was a challenge to find a new way of drawing. Holding the paper on my lap, I made small-scale images by moving the paper as well as the pen.”

Subsequent illnesses have stolen more of Nancy’s strength, so that she can no longer hold a pen.  But with the help of an innovative NHS Occupational Therapist, a special hand splint has been created, enabling her to write and draw again. Nancy says: “Although there are many ways of making art, I never want to lose my ability to simply make a mark on paper”.

The Incorrigibles: Perspectives on Disability Visual Arts in the 20th and 21st Centuries published by DASH (2016)