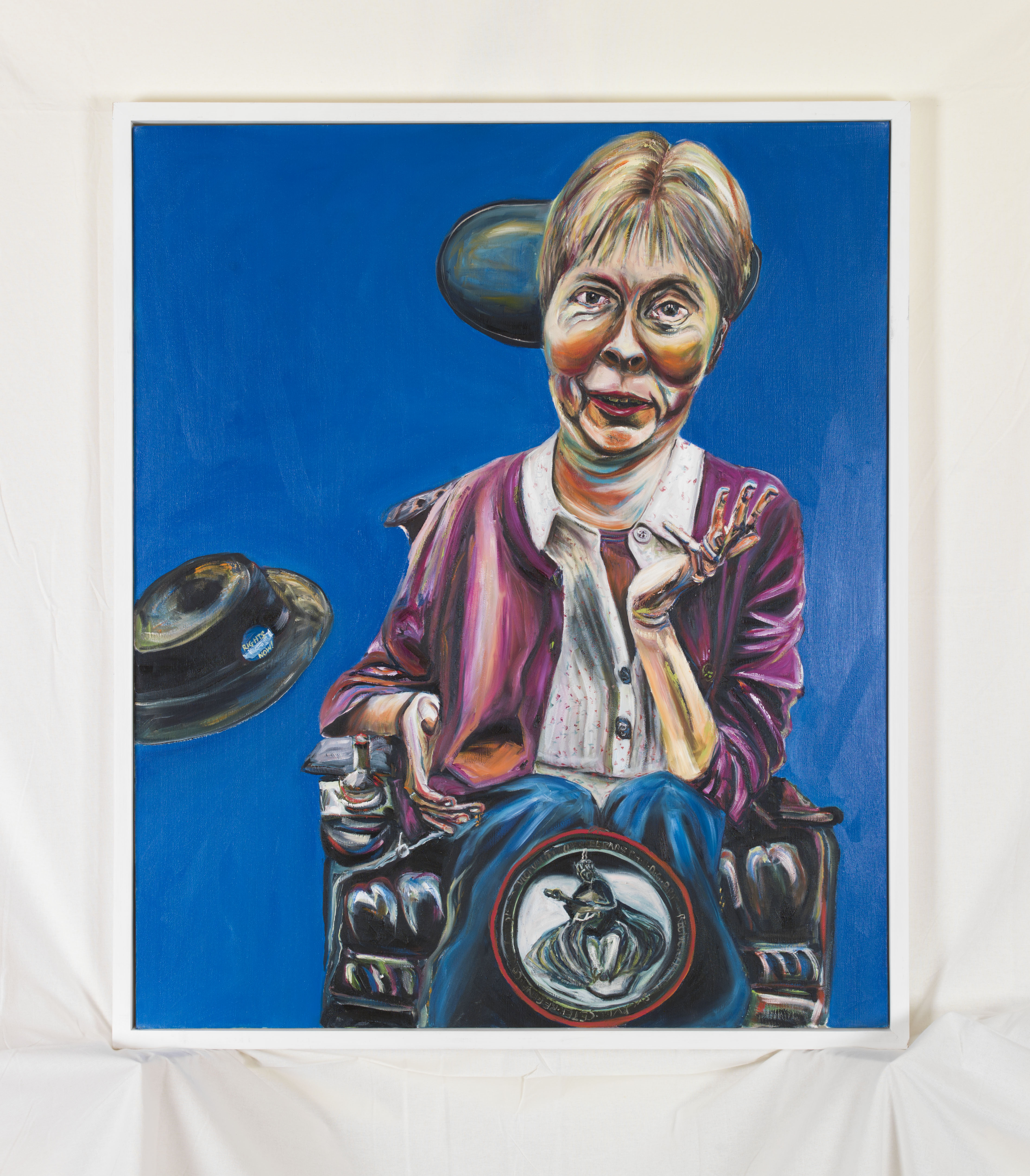 Portrait of Baroness Jane Campbell of Surbiton by Tanya Raabe-Webber

This audio description has been compiled by Joe Turnbull in November 2017. It was commissioned by Disability Arts Online on behalf of NDACA (the National Disability Arts Collection and Archive). It is read by the author. It is approximately 9 minutes 20 seconds long.

This portrait of Baroness Jane Campbell of Surbiton, D.B.E is an oil painting on canvas which is 30 x 36 inches in size by Tanya Raabe-Webber. It is typical of Raabe-Webber’s painting style, characterised by expressive brushstrokes and vivid colours. Whilst clearly figurative, the portrait is not photo-realistic, but highly stylised. Baroness Campbell’s cheeks are a deep orange and there are flecks of turquoise on her neck and in her otherwise-blonde hair.

Baroness Campbell is depicted seated in her power-assisted wheelchair. Her left elbow is resting on her lap, with her left hand turned so her palm is facing upwards, her fingers expressively splayed out. Her right arm is positioned on the armrest of the wheelchair, with right hand cupped inwards. A royal seal is resting against her shins. A dark, brimmed hat floats to the left of the picture next to Baroness Campbell in mid air, on it a badge which reads ‘Rights Now’. The background of the painting is filled in with a royal blue.

The painting is based upon live paintings and photographs taken during a sitting session at Tate Modern in 2010, and completed in Raabe-Webber’s studio the following year. The piece is part of a wider collection entitled Revealing Culture: Head On, which aimed to ‘challenge the notion of identity, the nude and disability culture within contemporary portraiture’. The project included a number of clothed and nude portraits of prominent disabled people, both artists and campaigners including Sir Bert Massie, Deborah Williams, Simone Aspis, Sophie Morgan, Tom Shakespeare, Sir William Lawrence, Garry Robson and Nabil Shaban.

In an interview with Disability Arts Online, Raabe-Webber remarked on the project:

“A research element to the project involved identifying artworks in Tate Modern, Tate Liverpool and Wolverhampton Art Gallery that reflect an aspect of disability culture. I sought to capture public opinion of the artworks and include people’s reactions in the process of developing further artworks. For instance, I’ve been thinking about Matisse’s collage ‘The Snail’ in terms of disability culture. The artwork was made with the aid of a support worker – something people won’t necessarily realize – and which I’m sure people will have an opinion about.”

The collection of paintings toured as an exhibition, launching at the Solihull Arts Complex in June 2011, before appearing at Southbank Centre’s The Museum of the World Exhibition between June and August 2012. It also exhibited at HSBC’s headquarters in London in 2013.  Jude Kelly, Artistic Director of the Southbank Centre said of the series ‘[It’s] groundbreaking and really absolutely necessary,’.  Sandy Nairne, then Director of the National Portrait Gallery described it as ‘impertinent in scale and wonderfully constructed’.

Baroness Campbell was an obvious candidate to be a subject for the Revealing Culture: Head On series, as both a member of the House of Lords and a Dame Commander of the Order of the British Empire (DBE). She studied at Hatfield Polytechnic before going on to do an MA at the University of Sussex. In 1996 she co-authored a book entitled Disability Politics and in the same year co-founded and directed the National Centre for Independent Living (NCIL). She was commissioner of the Equality and Human Rights Commission between 2006-8 and was made a life peer as a crossbencher in the House of Lords in 2007. She has been a lifelong campaigner for disability rights.

All of the sitters for the Revealing Culture: Head On series were asked to bring objects with them to feature in their portraits. Baroness Campbell brought with her a hat, a royal seal and a framed collection of medals, the latter does not feature in the finished portrait. The hat was given to Baroness Campbell whilst she was on a Rights Not Charity demonstration in the 1980s in the Elephant and Castle area of London, which was calling for universal benefits to allow disabled people to live independently. She continued to wear the hat at protests until her political career really took off: “I put the hat in a cupboard, because I thought that was the end of my direct action”. The Royal Seal in the portrait was given to Baroness Campbell when she became a peer of the realm on 30 March 2007.

Baroness Campbell said of the experience of sitting for the painting:

“The interactive portrait painting session was great fun. I thought I would be bored and fidgety, but because I could talk with the artist, as she worked (and with the observers who joined us in the afternoon), I felt engaged and entertained. The experience was quite surreal at times, but I guess that’s to be expected in the Tate Modern with Tanya Raabe at the easel. Her paintings certainly capture the more bizarre moments of my – and I suspect – other disabled people’s lives!”

Tanya Raabe-Webber was born in Scarborough. She studied for a BA (hons) in Graphic Design at Leeds Polytechnic, an MA in Communication Design at Manchester Metropolitan University and has a PGCE in Higher Education from Huddersfield University. Raabe-Webber has been a practising artist since 1987. The majority of her work is portraiture, usually of disabled or otherwise marginalised subjects. She was winner of the Ability Media International Award, Visual Arts in 2010 and DaDa International Festival, Visual Arts Award 2008. Raabe-Webber has also appeared on the BBC’s The Culture Show, undertaking a live televised portrait of the actor, musician and performance artist Mat Fraser and was shortlisted for The National Diversity Awards Lifetime Achievement.

In 2016, Raabe-Webber followed both of these projects up with Portraits Untold: four live portrait sittings with high profile sitters in well-known venues across the UK. This included David Hoyle at Beningbrough Hall, John Akomfrah at Birmingham Museum and Art Gallery, Evelyn Glennie at the National Portrait Gallery and Neil Baldwin at Stoke City Football Club. This project expanded the range of sitters to include people from other diverse backgrounds, not just disabled people.

A YouTube interview with Jane Campbell about the sitting

An interview with Tanya Raabe-Webber on the BBC Ouch website