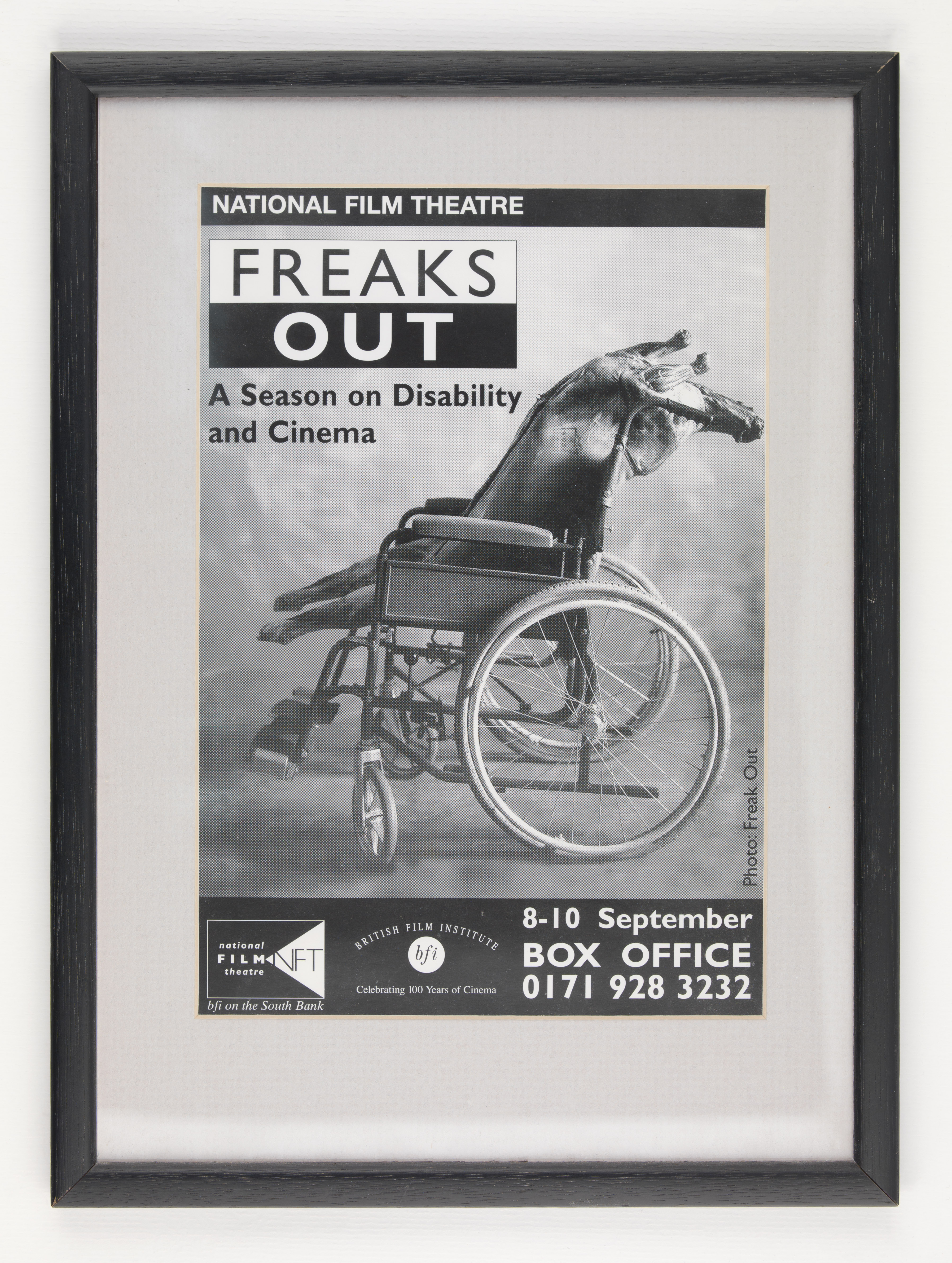 National Film Theatre poster: Freaks Out: A Season on Disability and Cinema

This audio description has been compiled by Joe Turnbull in February 2017. It was commissioned by Disability Arts Online on behalf of NDACA (the National Disability Arts Collection and Archive). It is approximately 7 minutes 40 seconds long.

Freaks Out is a black and white framed poster of roughly A4 size. The main image in the centre of the poster is a film still taken from David Hevey’s 1995 film, Freak Out. It depicts a prepared goat’s carcass, skinned, with its feet and head removed sitting in a wheelchair against a simple background of indistinct material. The wheelchair has large back wheels, pushing-handles and foot rests, and is typical of the type of wheelchair available on the NHS in the mid-90s. The way the carcass is positioned in the wheelchair gives the effect of it throwing its (non-existent) head back, perhaps in laughter.

In the top left of the film still, is a rectangular box with the words Freaks Out. Freaks appears in black text in the white top half of the box, Out appears inverted in white text on the black bottom half ). Underneath  black lower case text  reads ‘A Season on Disability and Cinema.’ In the bottom-right smaller text written vertically credits the image ‘Photo: Freak Out’.

Although the image in the poster is black and white, the film from which the still is taken was in colour. Hevey’s Freak Out was the first in a trilogy of films commissioned by the BBC’s Disability Programmes Unit for the series ‘Over the Edge’ which was edited by Ian McRae. The other two films were entitled ‘Remember Me’ and ‘Boo!’. All three were written, directed and produced by Hevey. Each film was approximately 30 minutes long and had original air dates of 2 August 1995 (Freak Out), 17 September 1996 (Remember Me) and 1 October 1997 (Boo!). They aired on BBC Two in the 23:15pm slot.

The trilogy was pioneering in both its depiction of disabled people and the techniques used to tell the story. Like high-end advertising of the time, the series was shot on film by Andrew Douglas. The soundtracks used a combination of commissioned scores, performance poetry, sung narration and prose. The trilogy employed theatre-designed settings and used “operatic heightened realist staging to create made-strange mise-en-scène inhabited with challenging images of contributors in cages or naked”. Each film had elements of oral history and used personal testimony from a broad range of disabled experience.

Freak Out explores themes of desire, power and sexuality in relation to disabled people. It subverts the ableist gaze with contrasting images of disabled people as objects of desire (in states of undress or working out) and invocations of problematic ‘freakshow’ images. For example, one contributor, Tina Leslie is repeatedly pictured in a cage, which was her own suggestion as that is how society positions her.

The film explores notions of the Ancient Greek’s still prevalent idea of the ‘Body Beautiful,’ and medical model attitudes towards impairment. It examines the relationship between power and beauty, positing that as disabled people have been disempowered they have internalised their own oppression and asexual depictions. The film suggests that as disabled people reclaim their bodies and seize power, they will become more widely accepted as beautiful.

Hevey remarked on the trilogy:

“I wanted to change how outsiders are seen. I have a few creative ideas – that how the outsider sees themselves is not how the world positions them, that everyone has agency no matter how oppressive their life, and that films should be journalistically true, yet take positions. For FREAK OUT, the challenge was basically how to show oppression without showing victims. The stories are of oppression, but the images are of defiance.”

Freak Out received a large amount of mainstream press attention, with major features written about it in both The Times and the Guardian. It tripled viewing figures for its post-watershed timeslot. Buoyed by the reception of Freak Out, the British Film Institute (then the National Film Theatre) programmed a season of disability cinema in September 1996, borrowing the name from the film.  Little information is available about the BFI programme.

David Hevey is a cultural producer, filmmaker, photographer and current CEO of Shape Arts. Before taking up this post he was Project Director at NDACA. Hevey’s film credits include three films for the landmark BBC documentary series Modern Times, and he has appeared as a presenter and critic, respectively, on From The Edge and The Late Review, both on BBC 2. Hevey also wrote the book The Creatures Time Forgot: Photography and Disability Imagery, described as ‘a political autobiography’ which was published by Routledge in 1992. His photography was also featured in Photography: A Cultural History published by Laurence King Publishing in 2006. Hevey is considered a pioneer in shifting visual representations of disabled people through both his film and photography work, and a strong advocate for disabled people’s rights.

This audio description was compiled using the following sources:
David Hevey’s website
A BBC Article about the NDACA archive
Archive of The Radio Times, the BBC Genome project
The original trilogy of films, ‘Freak Out’, ‘Remember Me’ and ‘Boo!
Conversations with David Hevey