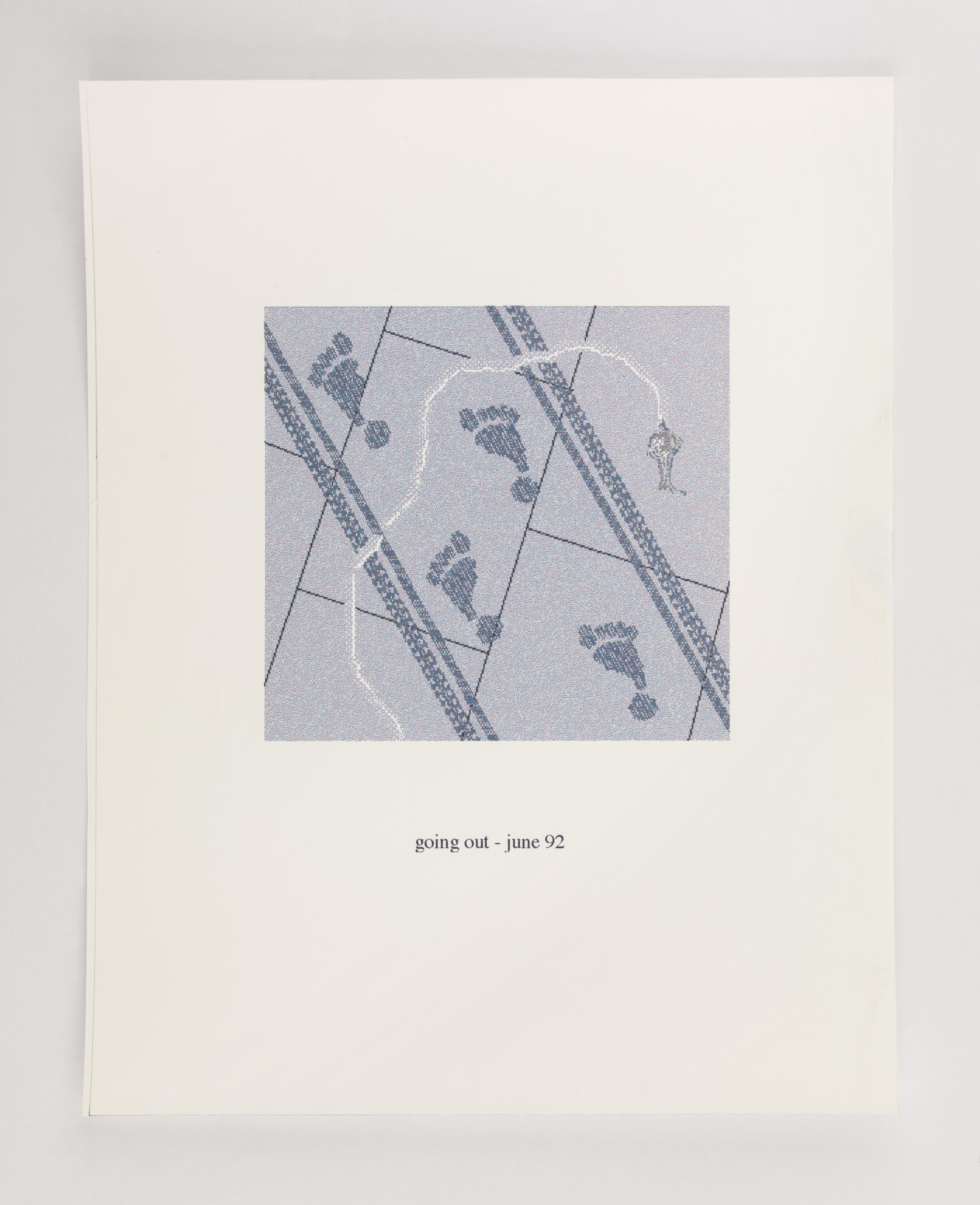 Going Out by Steve Cribb

This audio description has been compiled by Colin Hambrook in January 2018. It was commissioned by Disability Arts Online on behalf of NDACA (the National Disability Arts Collection and Archive). It is approximately 6 minutes long.

Steve Cribb (1944-1994) was renowned for his digital print-making. This example consists of a square, monochrome image placed in the middle of a white rectangular piece of paper, with the title ‘Going Out’ and the date June ’92 below the computer-made digital image. It consists of the blue tracks of a wheelchair running diagonally from bottom right to top left. The tracks enclose a set of footprints, moving in the same direction. Running across the opposite diagonal, from bottom left to top right, are the lines of a set of light-blue pavement slabs. A third element is a haphazard white line that sprays from an ice-cream cone shape, crossing up over the sets of wheelchair and footprint tracks and ends in the lower left hand corner of the image.

Steve Cribb was a talented writer, artist and as well as being a politician. As a councilor for the London borough of Hounslow he was a strong advocate of disability rights and a respected member of the Disability Movement. He was a member of the London Disability Arts Forum and exhibited his artwork widely during the first half of the 1990s. His work featured in several group exhibitions: ‘Hanging Up in Hounslow’ as part of the Louder than Words festival (London, 1991 and 1992); the ‘How We Like It’ exhibition at the Diorama, London (1993); ‘Defiance: Art Confronting Disability’ at City Museum and Art Gallery, Stoke on Trent (1993). Posthumously, a solo show ‘Famous Now I’m Dead’ was exhibited at Waterman’s Arts Centre, London (1994) and as part of Unleashed: Images and Experience of Disability at the Laing Art Gallery, Newcastle (1995).

Cribb returned to making art in 1989 after a long break in producing artwork. A quote from the artist exemplifies something of his determination and resilience: “As I lost the ability to draw with my hands, I became more and more intent on producing pictures.”

Following the influence of his sculptor grandfather Joseph Cribb, Steve Cribb was a strong advocate of the artist’s’ vision as the primary component of art and used artists’ assistants to realise his paintings: “The use of other people’s unskilled but willing hands allows me to produce Directed Paintings and later on with more experienced artists, I have made Collaborative Paintings.”

Cribb was also a pioneer of digital drawing, when in 1990 he began using an Apple Mac computer. With the use of a Headstart View Control Pack to convert head movements into cursor moves, he experimented with a range of genres from portraits and graphics to cartoons, often using visual jokes to comment on disability discrimination.

As well as being an advocate, Cribb was also a keen critic of disability arts. In Summer 1992 he published a controversial article in Disability Arts In London Magazine, entitled: ‘Are Disabled Artists Cotton Wooled?’ in which he discusses the pitfalls of the disability arts movement as an insular world lacking in aesthetic criticism.

“Because of discrimination and the like, disabled people-underachieve. There is such a low expectation of what we can do, that doing anything stuns Society into shocked amazement. We get over-praised for our most moderate achievements and, inevitably, we bathe in our moments of glory.

Supportive families and segregated education, make objectivity difficult for us to grasp. But we must learn the truth about our strengths and weaknesses if we wish to truly fulfil our lives. Our various impairments should not allow us to rob ourselves of some home truths: most people are ordinary, so are we; most people are passive consumers of life, so are we; some people are talented achievers, so are some of us.”

However, if we show some real “gift”, the ubiquitous praising and our own lack of objectivity can have stultifying results. They stop us from striving for improvement and so from reaching the heights of self-expression and acclaim for which all Artists strive.”

‘Going out’ stands as an historical example of the beginnings of the development in digital technologies and how they have empowered disabled artists to be creative. Cribb had an absurdist sense of humour which is highlighted in a description of the work by Alex Cowan, NDACA’s Archivist: “The image is simple: But simplicity can be suggestive, and this artwork definitely raises questions around the subjective experience of disability. Are they the footprints of a wheelchair user, or has their journey been spent with someone else? Where will the journey end? The image clearly expresses the universal joys of freedom of movement, discovery and immersion in the natural world. ‘Going Out’ is ‘disability art’ that speaks to the widest possible audience, by referencing and interpreting common experiences.”

This audio description was compiled using the following sources: DAM Magazines Summer 1993 and 1994, Disability Arts Online; Disability Arts Chronology by Allan Sutherland, Artist Obituary supplied by NDACA and direct quotes from the NDACA archivist Alex Cowan. It was commissioned as part of a series of 1000-word essays to mark the launch of NDACA, funded by the Heritage Lottery Fund, Joseph Rowntree Foundation and Arts Council England.