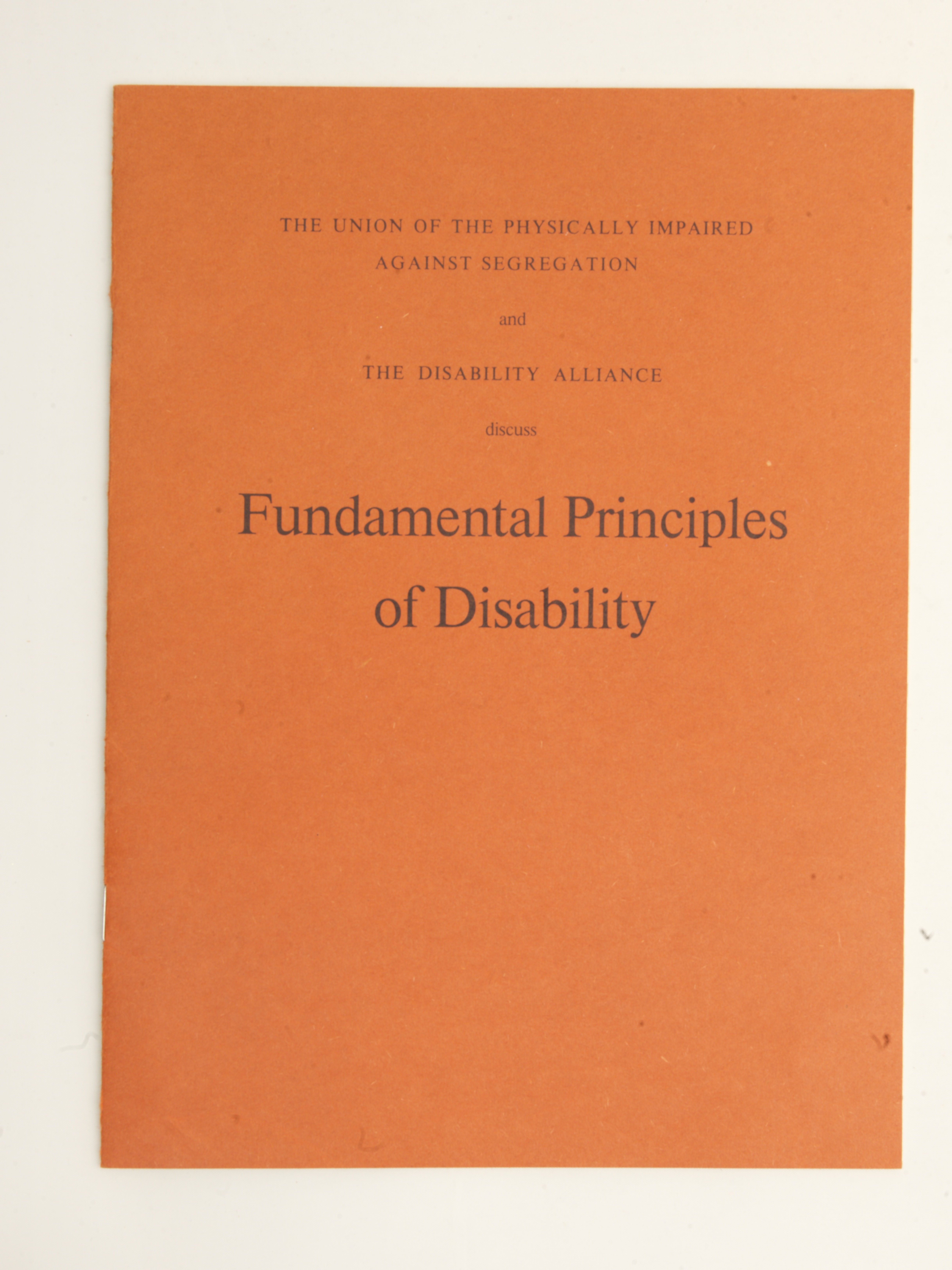 This audio description has been compiled by Colin Hambrook in February 2018. It was commissioned by Disability Arts Online on behalf of NDACA (the National Disability Arts Collection and Archive). It is approximately 8 minutes 50 seconds long.

This is the cover of a 24-page pamphlet published in 1976. Printed in black on red binding, the title in a Times New Roman font reads: THE UNION OF THE PHYSICALLY IMPAIRED AGAINST SEGREGATION and THE DISABILITY ALLIANCE discuss Fundamental Principles of Disability. The text is centred and the names of the organisations are in block capitals while the title is in large upper and lower case lettering.

The Union of the Physically Impaired Against Segregation (UPIAS) was an early disability rights organisation which established the principles that the Social Model of Disability was based upon. The Fundamental Principles of Disability was a leading influence in revolutionising disabled people’s understanding of their role in society.

As such, The Fundamental Principles of Disability became a cornerstone for the development of Disability Studies – an academic discipline that examines the meaning, nature, and consequences of disability as a socially constructed phenomenon.

Within the booklet UPIAS states that:

“In our view, it is society which disables physically impaired people. Disability is something imposed on top of our impairments, by the way we are unnecessarily isolated and excluded from full participation in society. Disabled people are therefore an oppressed group in society. It follows from this analysis that having low incomes, for example, is only one aspect of our oppression. It is a consequence of our isolation and segregation, in every area of life, such as education, work, mobility, housing, etc.”

Although disability activism can be traced back to the 1800s, this was a ground-breaking insight in terms of an emerging disability community of activists realigning disability identity in a new and radical way.

The idea that individuals were not disabled by their impairments but by the barriers that society places in their way was a key understanding and involved a rejection of the Medical Model perception of disabled people as being in need of correction and cure. The Social Model was taken on by an emerging Disabled People’s Movement. UPIAS’ way of thinking was to focus on the disabling aspects of society at the root of discrimination and to highlight a need to break the link between definitions of impairment and disability.

The Fundamental Principles of Disability defines:

“impairment as lacking part of or all of a limb, or having a defective limb, organ or mechanism of the body; and disability as the disadvantage or restriction of activity caused by a contemporary social organisation which takes no or little account of people who have physical impairments and thus excludes them from participation in the mainstream of social activities. Physical disability is therefore a particular form of social oppression.”

UPIAS was founded in 1972 by Paul Hunt (1937-1979) when he invited disabled people to form a group to confront disability issues. Hunt printed a letter in The Guardian newspaper on 20 September 1972, and in the Magic Carpet newsletter of the Disabled Drivers Association, calling for a radical union of disabled people to fight for mainstream rights and to fight against segregation.

Many members of UPIAS lived in residential institutions run by big charities and feared discrimination if their activities became known. Membership of UPIAS was by invitation only and remained confidential to prevent the organisations that controlled their lives from taking reprisals.

Over time UPIAS produced a private newsletter, the Confidential Circular and a public newsletter Disability Challenge. In 1976 UPIAS published its Fundamental Principles of Disability which became its manifesto and a seminal document for the British Disabled People’s Movement.

Much of the conversation in The Fundamental Principles of Disability is laid out as an argument between members of UPIAS and members of the Disability Alliance. Both organisations were advocates of disability rights, however they differed in terms of their understanding of how to define disability.

The impact of the ongoing precedent this document set was to encourage disabled people to take control of their lives. The Fundamental Principles of Disability empowered disabled people to stop viewing impairment as the cause of the problems they faced, but rather the way society responds from a Medical Model perception which often patronises and discriminates.

Leading members of UPIAS included Paul Hunt, Vic Finkelstein and Ken and Maggie Davis. The Davises pioneered independent living, by commissioning their own housing scheme at Grove Road in Sutton in Ashfield. After four years of work including buying the land, working with architects and bringing in adapted fittings from Sweden, they moved in on 13 September 1976.

Another impact of an emerging Social Model understanding was the placing of a stronger emphasis on disabled people’s organisations being run and controlled by disabled people. This represented a huge shift in power balance, challenging disability charities – which were and still are – largely run by non-disabled people, to rethink their approach towards the communities they were set up to serve.

An unabridged version of The Fundamental Principles of Disability scanned and reformatted from the original by Mark Priestley, in consultation with Vic Finkelstein and Ken Davis in 1997 resides on the Leeds University Disability Studies archive. An editor’s note in the preface reads: “Being a summary of the discussion held on 22nd November, 1975 and containing commentaries from each organisation.”

Liberation Architecture: Maggie Davis and the Birth of Independent Living. – A History of Place

It was commissioned as part of a series of 1000-word essays to mark the launch of NDACA, funded by the Heritage Lottery Fund, Joseph Rowntree Foundation and Arts Council England