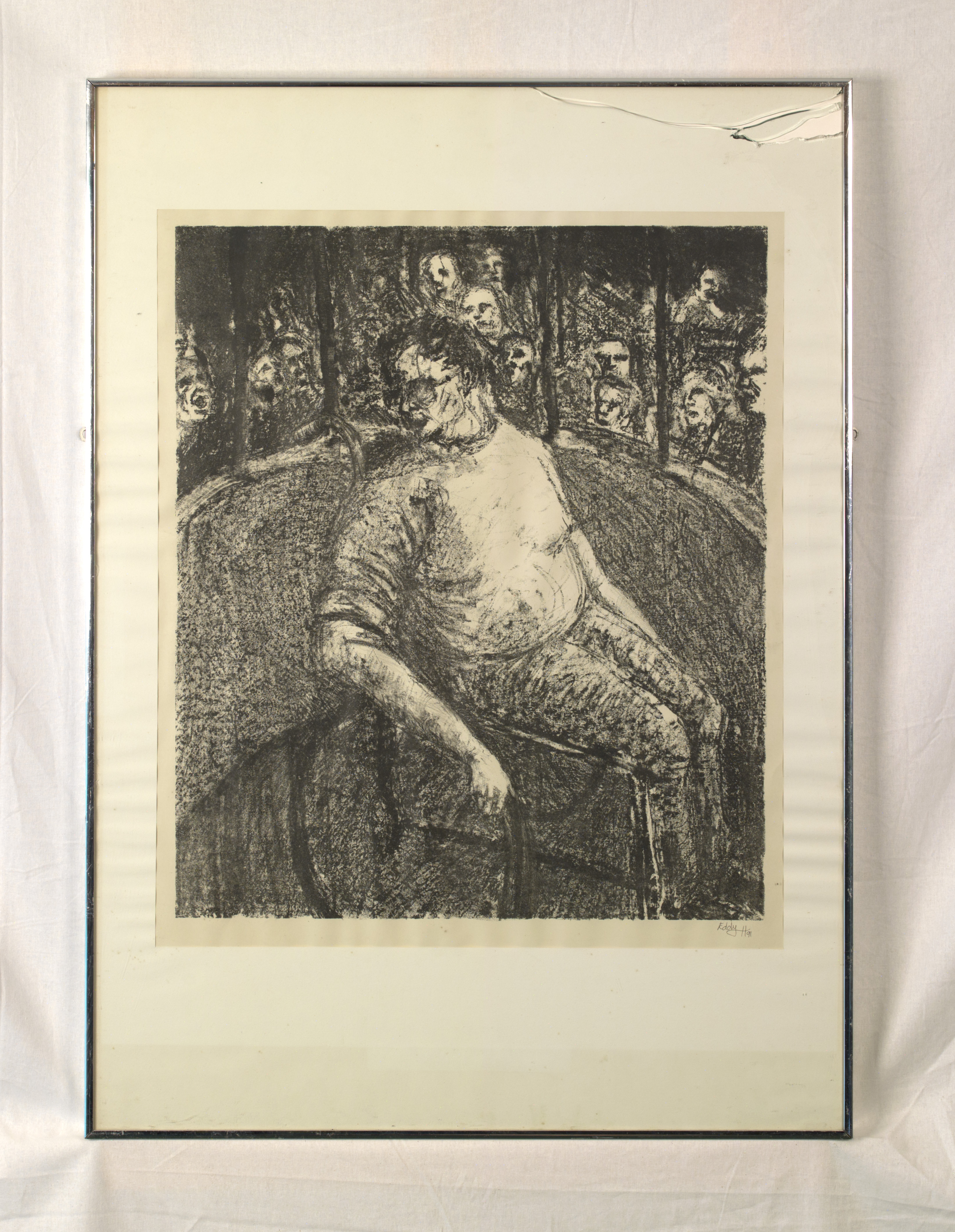 This audio description has been compiled by Joe Turnbull in March 2018. It was commissioned by Disability Arts Online on behalf of NDACA (the National Disability Arts Collection and Archive). It is approximately 8 minutes 40 seconds long.

Freak Show is a framed lithograph print of A1 size by disabled visual artist Eddy Hardy. A male wheelchair user of slightly heavier than average build dominates the centre of the work, his arms resting on either wheel. He is seated at a 45-degree angle to the viewer’s perspective, his head looking over his right shoulder. He is wearing a set of glasses, the frames shaded in – so they could be sunglasses. His clothes are plain with little perceptible detail. He has quite a neutral expression on his face, considering the menacing nature of the situation he is in.

The central figure is in the middle of a circular cage, forming a round concrete barrier with dark prison bars rising in a semi-circular fashion up to the top of the image. The bars are equidistant and emerge from the top of the barrier at the wheelchair-user’s chest height.

On the other side of the cage are a series of floating heads looking in on the central figure ominously. They are staring at him in a disturbing fashion, some of the heads seemingly jeering at him in a mocking way. All of the onlookers have ill-defined features and no hair. Being a lithograph, the image is all in dark tones of grey and black, using shading to great effect. This adds to the overall sense of foreboding that the image instils on the viewer. The paper it’s printed on is a yellowy off-white and has a signature in the bottom-right corner.

The image was created by Hardy some time between 1990 and 1991. The central figure loosely resembles the artist himself, as he remarks:

“Although I used myself as a basis for the main figure, it is not a self-portrait. It was more a general statement with regards to disabled people, rather than being strictly autobiographical. The piece was based upon my experience as a disabled person – of being stared at or ‘put on show’ by various people and organisations”.

When he was younger, Hardy initially shunned his status as a disabled person, as he is quoted as saying in Tom Shakespeare’s The Sexual Politics of Disability (1996): `’If I saw anyone who was disabled I didn’t want to talk to them, and if I did talk to them it was as if I was able-bodied, doing the old patronising bit”. But he later embraced his disability identity, which can be seen in Freak Show and other later works.

The title of the piece is a clear reference to the freak shows, which objectified physical difference starting in the 16th Century and reaching their pinnacle in the Victorian-era travelling circuses. The cage in the picture clearly alludes to this. Whilst the ‘freak shows’ of this nature are mostly a thing of the past, Hardy draws parallels with the contemporary disabled experience of being ‘othered’ and chastised as a result of being visibly different. The freak show has provided ample ammunition for critical, defiant disability art for decades, and was also referenced in David Hevey’s seminal 1995 film, Freak Out.

The era when Hardy’s ‘Freak Show’ was created marked something of a watershed moment in the disability arts movement, as Disability Arts Online Editor Colin Hambrook observes: “Up to that point the movement was about getting people out of institutions, fighting for the means of independent living. From 1990 onwards is when art became more prominent in the struggle for Disability Rights. The setting up of London Disability Arts Forum (LDAF) [pronounced El-Daf] in 1987 was a catalyst for that change.”

Hardy’s motivation for the piece was to address the lack of art which really reflected the disabled experience:

“At that time there was very little in the way of issue-based art or anything that I felt was ‘Disability Art’; for me that meant art created by disabled people, primarily for an audience of disabled people that dealt with issues around Disability Culture including discrimination.”

In 1993, Hardy’s work appeared in an exhibition called Defiance: Art confronting Disability, at the City Museum and Art Gallery, Stoke on Trent. Other artists in that exhibition would go on to become stalwarts of the Disability Arts Movement, including Tanya Raabe, Steve Cribb, Adam Reynolds, David Hevey and Nancy Willis. There is a high chance Freak Show appeared in this exhibition, but this could not be confirmed.

Hardy appeared in a number of other high-profile Disability Arts exhibitions throughout the 1990s including: Unleashed: Images and Experience of Disability (Laing Art Gallery, Newcastle), 1995; Art Through the Front Door (Diorama Gallery March 1995, then touring the country during 1995 and 1996. Part of Fair’s Fair, the 1995 Disability Arts Festival organised by Essex County Council); Wrong Bodies Exhibition and performances (Institute for Contemporary Arts, London 1999). Hardy also featured in the Millennium Meltdown Disability Arts and Cultural Diversity Festival in 2000 in the visual art exhibition element at Pump Rooms Gallery, Warwickshire.

Freak Show has been held as part of the NDACA [pronounced En-Dac-Ar] archive from its early incarnations at Holton Lee. It has been in the collection so long, that until recently, Hardy had thought that the artwork had been stolen.

Hardy’s style changed over time, moving away from that characterised by Freak Show, as he explains: “My work developed from this to large scale nude self-portraits dealing with sexuality, disability and identity.” An example of this can be found elsewhere in the NDACA archive.

Hardy was born in Merseyside in 1965. He studied at Coventry University, where he graduated with a BA (Hons) in Fine Art in 1992. In 2005 he completed an MA in Fine Art at University of Northumbria, Newcastle where he now resides.

“Although I have not produced much work over the last few years I still consider myself a practicing artist. Whilst I may draw or paint any subject matter, much of my work deals with the same issues and the human condition. Having had changes in my health, I have produced some recent work based on those experiences.”